Neither the body nor the Earth is God but, rather, are precious gifts meant to glorify Him. Our body is going to die and our earth is going to be burned one day, and God will give us a new body and new earth. Many people turn to creation(earth)-worship when they stop worshiping God.

It’s such a huge topic, and I must admit I know very little of it. Here are few points I want to say:

Recognized what we did not know

This is a wise thing to do. Too often we want to stand on what little things we do know and pretend we have the whole of it. I am worse at this point myself, thankfully we can always talk things through, and help each other learn more things.

“To care for the earth” is not the excuse for us to not take care of our little earth, let alone we humans usually don’t have the knowledge to really calculate the results as a whole of specific actions, especially a big topic like environment.

For example, from a page about environmental effects, cheese, chocolate, and coffee are in a higher position than poultry meat. But bear in mind, these charts and numbers which look so clear, are just results based on specific models on computers, reality is much more complex. 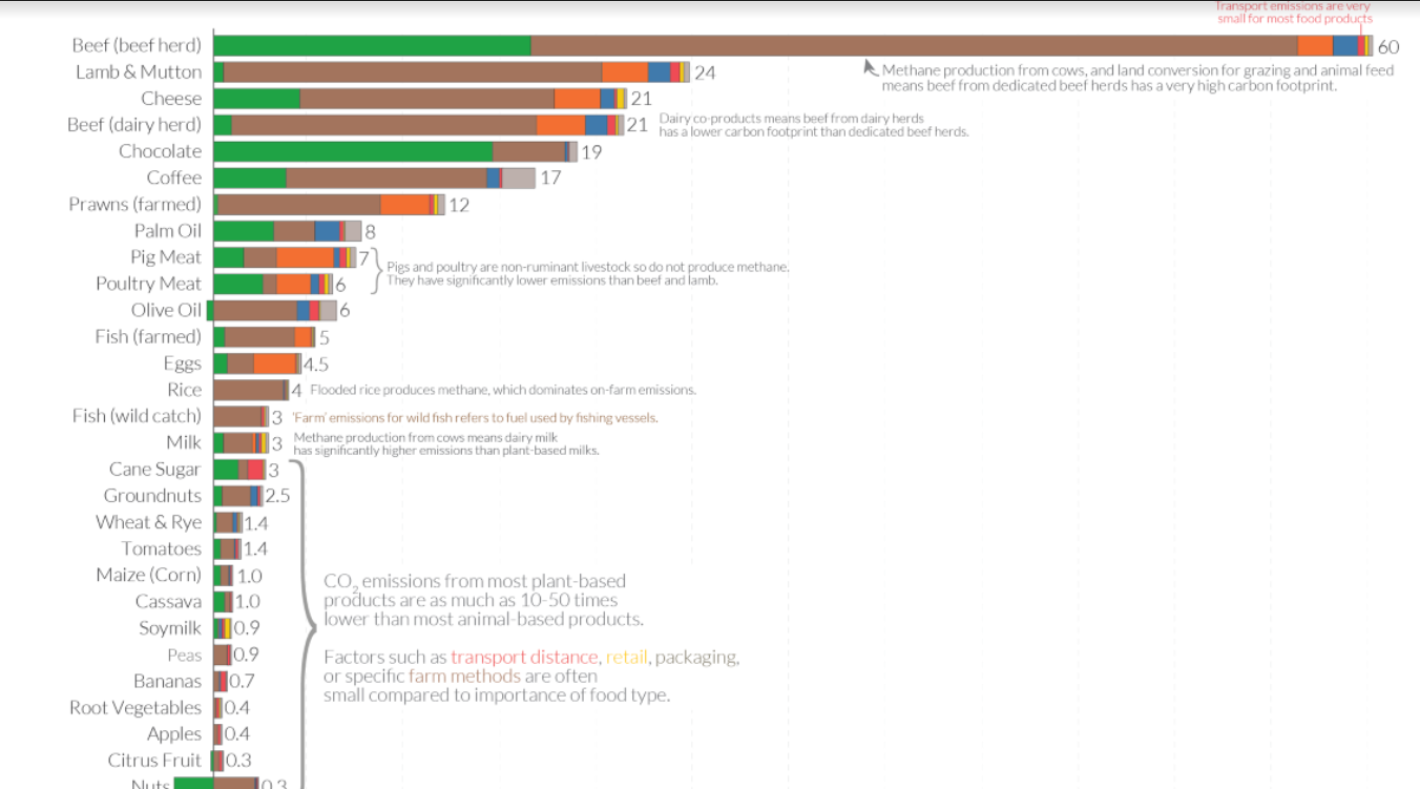 From some articles, sugar and refined carbs are also one of the biggest targets to blame for the environment. Plus, they don’t provide essential nutrition compared to healthier carb sources, unlike moderate meat consumption(still the best protein source), but are consumed so widely and even bad for our little earth(body) and NHS.

Some articles talk about diet and environment together, they put “refined grains”, “added sugar” together with “red meat” and “processed foods” as “low amounts or no”.

The point here is not to make us shameful, but to point out how huge these topics are. I still think when we eat anything, we shouldn’t feel guilty at all, as God provides us our daily food and it’s better to enjoy it gratefully. We can definitely try what we can to the best of our knowledge and circumstance, but to be sure of the result of anything to our body, society, and environment as a whole is almost impossible, a steak or a cake can just be a pure blessing to ultimately serve the kingdom of God.

NOT looking to the world’s approval for which stance to take.

For many things, it’s not that we actually care that much or buy the reason they claim, but to be in the same position as others so we feel less pressured. Many people don’t care about the truth, but if you are with them.

For example, the covid origin and the virus lab in Wuhan. For the past year, all the big media and scientists have said this is a conspiracy theory. Personally, I still believe it may have leaked from the lab, there are other reasons for them to say that last year. Let alone obviously WHO cheated the whole world at the beginning of covid with China together.

Behind the environment, it’s usually always politics. We can see most of the media as propaganda to a certain extent, and it is almost always in the service of politics, even though it looks only talking about some other topics like the environment.

If for whatever target, we need to have a huge government worldwide, or we have the potential ability to ask individuals to make sacrifices to achieve some so-called greatest goals for all humans, be very aware of it because we potentially put ourselves in the position of God. If the government can ask people to stop eating beef for such a noble reason, the “earth”, similar to “achieve communism for the happiness of all humans”, based on the government power, they can ask people to have only one child, force abortion, or build concentration camps for “peace”. For whatever target, only disaster can be achieved if we humans try to build the tower of Babel.

“It has always happened that the more I hate people individually, the more ardent becomes my love for humanity as a whole” - The Brother Karamazov

Some other random thoughts about the environment, China

Is the impact of agriculture, especially our diet, the biggest problem to the environment? Looks like it only accounts for a small proportion, and the change of diet may account for even smaller. If you drive for a long time to find a vegetarian restaurant, will it cause more pollution? Many fruits shipped by air may cause more pollution than local eggs? If everyone is vegetarian, according to some studies, will it completely destroy the balance of the environment?

Back to the environmental topic, it’s the energy industry itself who contributes the most. Of which country, China is the biggest target. I don’t know much about environmental protection, but I know a bit about China. So, if western countries have to negotiate with China, China says you guys stop caring about those Uyghur in camps and HKers and covid origin, and I will make my pollution number better, how’s that? Can we humans have the wisdom to handle such things easily?

To make pollution numbers better, they can simply force ordinary people to change their life extremely. For e.g. few people died after burning a new special clean coal in villages in Hebei due to carbon monoxide poisoning and they were most likely forced to use it. Recently, China cut power in multiple provinces, many without alert. People talk about big topics like economic impact, yes it’s important, but don’t forget how many people are stuck in elevators and how many patients will lose their lives.

Back to diet, our little earth. Practically there are 3 things I want to mention: less refined carb/sugar, enough veg/fruits, enough protein. I think our goal is to have roughly just over ⅓ of good carbs, very little or no sugar, spend the time we have(it doesn’t necessarily mean we need more energy and time to prepare better food), and enjoy our food joyfully.